While tying up the loose ends of my Christmas shopping over the weekend, I found myself in the aisles of Wal-Mart looking through the cardboard selection. I knew that I wanted to begin building the 2017-18 Parkhurst set so I promptly picked up three blasters and went on my merry way. 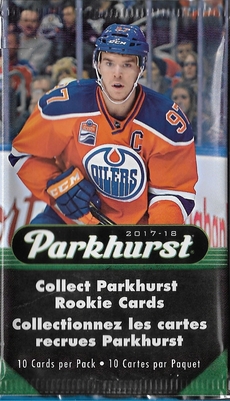 2017-18 Parkhurst is a Wal-Mart exclusive product that weighs in at 300 cards, 100 cards less than last years installment. Each team features several players and 47 total rookies. There are also three checklist cards in the mix. Parallels cover the entire set in the form of "red border" (1:3) and "black border" (1:12) variations. 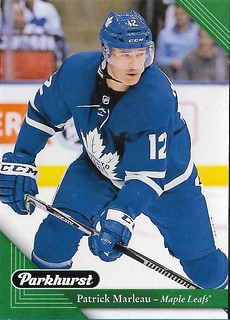 Parkhurst gives collectors the first look at players who were moved during the off-season in their new colors. I'm still not completely adjusted to seeing Patrick Marleau play in a Maple Leafs jersey! 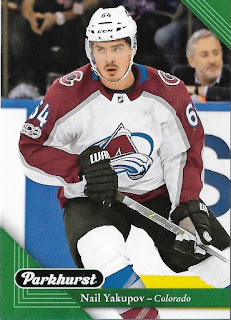 Yakupov is on track to have the best season in his career; which isn't really saying much as his career highs in goals (17) and points (31)  were set during his rookie season nearly five seasons ago. Everything after 2012-13 has been considered unfulfilling for a NHL 1st Overall Draftee. It's good to see him begin to show some signs of redemption with the Avalanche. 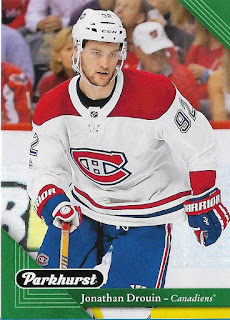 On the contrary to what I mentioned earlier, this is not the first card to feature Drouin in a Habs jersey (17/18 UD Memorable Moments).

There's nothing too special to mention in regards to the photography used in the set - much like O-Pee-Chee, the visuals spanning the entire base set is pretty standard. 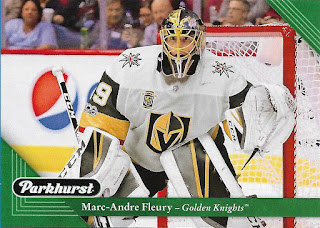 Fans also get their first peek of the Vegas Golden Knights in action on cardboard through the Parkhurst set.

From the first and second blasters I was able to accumulate the better part of the base set, pulling card after card that I needed towards the checklist. I whipped through both blasters without unearthing a single double.

The third blaster on the other hand, well, I may have pulled a card or two that I needed in every 3-4 packs. It was brutal! I knew it would be bad but I didn't think it would be that bad considering I still needed about 70 cards.

In the end, after burning through 360 cards over the course of three blasters - I still need 57 cards out of the 252 card standard base set. 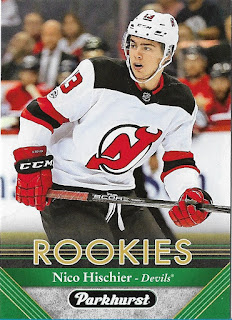 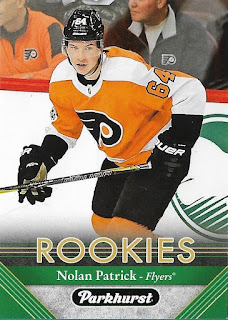 Out of the three blasters I pulled the majority of the Rookies featured in the set. The boxes were quite liberal in terms of the amount of Rookies distributed throughout. Despite that, I'm still looking to fill 12 empty spots in the prospect category. 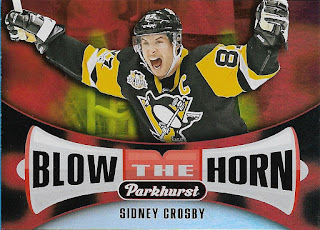 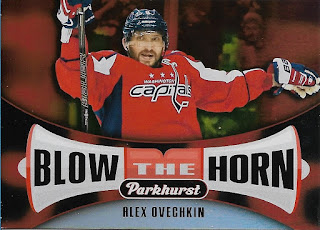 The 10-card 'Blow The Horn' insert set is definitely my favorite from the product to chase; focusing on 10 of the biggest current names in the league and the excitement generated from putting the biscuit in the basket. I get a late-90s vibe from them, I like that.

I pulled a total of 6 amongst my blasters including a double of #BH-3 Patrick Kane. 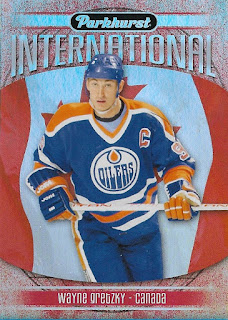 Parkhurst International is a 24-card insert set broken up into several countries featuring three representatives per flag. Two current players and a retired star seems to be the chosen trend. 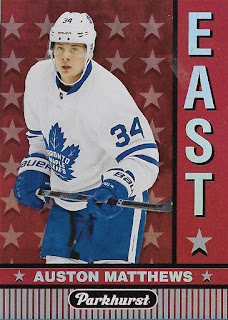 East vs. West takes a conference approach, highlighting eight players from each side. 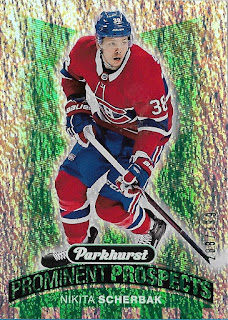 The rookie class is exhibited through the 25-card Prominent Prospects insert set. Parallel versions include Green (#/399 - Blaster only), Red (#/199 - Gravity only), and Gold (#/99 - Blaster only). The limited Blue Autograph version applies signatures for 19 names in the line. Unfortunately you won't find any ink from top prospects Nico Hischier and Nolan Patrick though as they are both signed to exclusive deals with Leaf.

The Nikita Scherbak, shown above, is a Green parallel #/399 - I'm hoping that maybe I can flip it and purchase something I can put towards this undertaking. Aside from the Scherbak parallel, I also pulled regular versions of Jon Gillies, Filip Chytil and Will Butcher.

For the $20CDN price tag, you can't argue with it. It's fun, affordable and there's an opportunity to pull some good value cards given the inclusion of autos from a decent rookie class. In general it's a nice set to build with the realistic possibility to complete the insert sets as well.

I now have a ton of doubles to trade so I'm looking to wheel and deal to further complete the set. Anyone else building Parkhurst?