"It's all over for another year", as my sister would say. I hope everyone had a fantastic Christmas a' la anything and everything else you may be celebrating. Personally, it has been great - Always a good time to be had when I am spending the Christmas season at home with all the family.

We arrived back home a day earlier than we had initially anticipated so there's some downtime tonight before we all hustle back to the daily grind. Perfect time to post the contents from the second of four 2016-17 Upper Deck blaster purchases from last week.

A warning in advance, it wasn't an overly exciting blaster.

How about this guy, David Pastrnak - having a great season thus far accumulating nearly a point-per-game average for the Bruins. Boston could really use him right now as they have lost 6 of their last 9 games.

Bieksa and Landeskog pimped up in retro third jerseys, sorta. The Ducks took to their Disney roots with the old-school Mighty Ducks logo and the Avalanche rocked a crest that gave tribute to the Colorado Rockies franchise.


Fun guy to watch; not one to shy away from getting in the dirty areas and hanging out in the crease. The type of player who you tend to despise but would love to have on your team.

Having another solid season thus far backstopping the Wild. I've been hearing his name thrown around in Vezina talk lately, it's still early though, we'll have to see about the hardware.

I've laid all my high hopes of a nice pull from these blasters on the Young Guns checklist. Featuring a strong crop of rookies, there's always a good possibility of scoring a promising rookie.

Nick Sorensen opened up the 2016-17 hockey season wearing an Anaheim Ducks jersey for 5 games before being sent down to the AHL with the San Diego Gulls.

Milano has spent the majority of the season so far as a member of the Cleveland Monsters in the AHL, getting a taste of the big show with the Blue Jackets for 2 games.

Like Sonny Milano, Justin Bailey has suited up for 2 National Hockey League with the Sabres while spending 29 games as a Rochester American.

A 'UD Canvas' card of Gabriel Landeskog sharing a high five with Avalanche mascot Bernie, the St. Bernard was probably my favorite card from the entire blaster. What can I say, I'm a sucker for any piece of cardboard featuring a mascot.

The box also included a couple of 'Shining Stars' and 'UD Portraits' inserts along with a whopping 42 base doubles. Overall, I felt that the blaster wasn't anything special and the gamble in it didn't work out in my favor per say.
Posted by Coast To Posts at 11:25 PM 1 comment:

Upper Deck Black Diamond has been a set that I've never been quite sure how I've felt about. Over the years, Black Diamond has kept their familiar foil heavy design that you either love or hate - the scanner seems to visually loathe the product.

2012-13 Black Diamond was released 4 years ago this month while the NHL lockout continued to drag on. Therefore, like most of the releases from 2012-13, the only rookies are those who debuted late the previous season and during the playoffs. In a nutshell, the rookie crop was weaker than usual. On the bright side, the slim pickings of notable rookies has severely lowered the cost of the majority of hobby boxes from that year - you can pick up a hobby box of Black Diamond for as low as $50-60.

Despite the lack of top rookies distributed in the product; Black Diamond offers quite a few unique inserts, memorabilia cards and autographs at an affordable price.

I rolled the dice and grabbed a couple of packs for cheap while at the flea market this past weekend.

Gotta start the pack scans off with 'Super Mario'. I'm going to guess that this photo of Mario was taken during the 2002-03 season as he is wearing the distinct Nike Quest helmet that he helped the company launch that year ('03). Lemieux's Nike contract expired September, 2003.


I used to be into Gerbe because of his underdog size. As a vertical challenged person myself, all 5'5" of me, I've always cheered those guys on a little harder.

A card featuring Ryan Smyth in an Oilers sweater is like sitting at home by the fire, all is calm and all is right.

You may not be able to distinguish from the scan but this Brendan Smith is actually a Double Diamond short-print.

It was a very nice surprise to pull this sparkly acetate insert featuring Chris Drury of the Colorado Avalanche. At a rate of 1:168 packs, these 'Championship Rings All-Time Greats' fall at an average of 1 per case. A case hit, totally unexpected.

Drury received his Stanley Cup ring in 2001 after helping the Avalanche put-away the New Jersey Devils in the Stanley Cup Finals 4-3.

It took over five years in the making but a few months back I finally picked up the last couple of cards to complete one of my all-time favorite insert sets, 1996-97 Score Sudden Death.

Randomly inserted in hobby packs at a rate of 1:35, this 15-card holofoil set featured two action photos simulating matchups of some of the deadliest snipers against the league's top netminders.

The mid-late '90s is my beloved childhood hockey era so any inert set featuring the greats of the game during the time is totally up my alley. Pulling one of these cards seemed just as difficult as winning the lottery back in 7th grade; who knew that twenty years later you could buy the majority of 'em for a couple bucks. 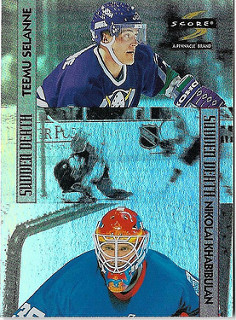 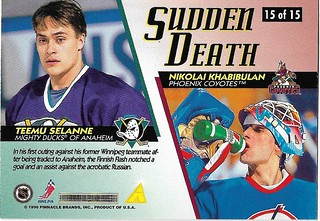 I'm pretty sure I bought the final card (picture above) from eBay. Surprisingly, finding the final two cards deemed more difficult than I had imagined given that they're a set from the 90s.

I thought the player selection was pretty good. I would have personally switched out Pierre Turgeon for Peter Forsberg or Eric Lindros and replaced Corey Hirsch for Patrick Roy but that's just my opinion.

The most valuable card from the set book wise would probably be the Wayne Gretzky/Felix Potvin matchup, quite frankly because it's a Gretzky card.

Here are scans of the complete 1996-97 Score "Sudden Death" insert set for your viewing pleasures.

Here I am, back again! I decided to start from scratch and pick the hobby back up for the meantime. I've just really missed collecting and blogging about hockey cards as a pastime.

What better way to kick things off than with Upper Deck's annual flagship release. A set that I have decided to pursue in putting together. As per usual, the set contains 200 cards featuring veteran players and as expected, 50 Young Guns cards - off course, I'll be chasing those as well.

Speaking of chasing, on a whim I broke the seal by picking up a few blasters. I thought it would be a good way to get my feet wet again while accumulating the base set as well as whatever inserts and Young Guns may fall. I'm not going to lie, pulling a coveted Auston Matthews rookie was certainly dancing like sugar plums in my head.

I've decided to post the contents of each box individually showing my favorite cards from each break.

In my opinion, the design looks fantastic! The photography selection is a step above from last years release as I thought there were way too many close-ups in the 2015-16 Upper Deck set.


Let's strike the match with one of the two checklist cards included in the 200 card base set; featuring two captains who helped lead their teams to the Stanley Cup Finals last season.

I've always had a special place in my heart for the Phoenix Coyotes inaugural Aztec jersey.


I've recently taken a liking to Ryan O'Reilly since watching him play at the 2016 World Cup of Hockey as well as his tenure with the Buffalo Sabres thus far.


Galchenyuk has been an exciting player to watch for the Canadiens. Hell, I'll swallow my pride and go so far as to say that the Habs have been a fun team to watch this season in general.

Nice shot of one of my favorite players in the league right now.

Despite having very solid numbers for a rookie netminder, Murray's name doesn't drop as much as Laine and Matthews when it comes to the 2017 Calder race. I think the fact that he is technically still considered a rookie is overshadowed by how much he stood between the pipes for Pittsburgh and accomplished last season during the playoffs.

It's crazy how far this guy has come in the NHL. From being moved around like currency, Burns has finally found his place as a Shark. From helping San Jose make a Stanley Cup Finals appearance, capturing the World Cup and being an early favorite for the Norris Trophy - Burns has taken his hockey career to new levels.

Here's a card capturing one of the feel good moments from last season. Spoiler alert: Ryan scored a goal in the second period and the kids received their puppy as promised which they conveniently named 'Bobby'.


Kyle Connor was picked in the 1st round of the 2015 NHL Entry Draft and has seen a fair share of ice with the Winnipeg Jets so far into the season.

I'm unfamiliar with Zach Sanford but he has seen 19 games with the Capitals thus far this season, recording one assist.

Czarnik has been a regular member of the Bruins lineup, recently snapping a 16-game goalless drought.

Although my Young Guns weren't named Matthews or Laine, I did end up with a consolation prize - a 4th Young Gun, a UD Canvas to boot. The UD Canvas Young Guns are a tougher pull than their normal counterparts so it's always more special when you uncover one.

Lawson Crouse has been having a promising rookie year with the Coyotes, developing into a valuable role-player on the team whilst showing flashes of power-forward potential.

I also pulled a couple UD Portraits and Shining Stars but those insert sets haven't 'done it for me' since their inclusion in the annual flagship roll-out.

It was a fairly decent tin of cards overall, no complaints here. I picked up nearly half the base set and although I didn't hit any of the highly touted rookies that I was hoping for, it was a good mix of cards all-around. I'm looking forward to sharing what's inside the next box.
Posted by Coast To Posts at 11:11 PM 1 comment: