I was feeling adventurous the other day; so I stopped by the local hobby shop on my way home from work and treated myself to a lavish pack of 2016-17 Upper Deck SP Authentic.

In my head the fruitful possibilities were endless as visions of Connor McDavid patch cards, Sidney Crosby autos and Auston Matthews 'Future Watch' rookie autos danced in my head.

I'll be honest, my track record for pulling exciting hits from single packs has been poor; but there's always that hopeful lingering thought, could this be my day? 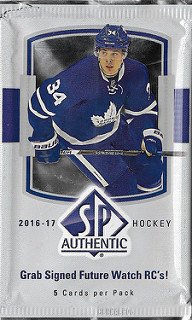 Auston Matthews graces the cover of SP Authentic this year and rightfully so - 'Future Watch' rookie cards are the gems in this product and who better to man the helm than the 2016-17 Calder Trophy winner himself.


Despite a terrible 2016-17 hockey season, Joe Sakic has done very little to improve the Colorado Avalanche over the offseason. Landeskog has felt a decline in production as well, registering just 33 points in comparison to 53 from the previous season.


Back-to-back Calder Trophy winners and we're only 2 cards in, could this be a sign?!

Carolina is an example of how to 'do it right over the offseason'; picking up some key players such as Kruger, Justin Williams and Scott Darling who I feel will only benefit the team. I'm looking forward to seeing how the season unfolds for the Hurricanes; I've heard a lot of positive feedback in regards to their acquisitions and the direction they're headed in.

Cue the sad trombone, all wishful thinking has just been crushed with a Pavel Zacha 'Silver Skates'. Nothing against Zacha by the way; I've just never liked the 'Silver Skates' inserts in general.

The base design of the cards aren't anything to write home about. SP Authentic keeps to their traditional clean, simple feel which has been working for it - why fix something that isn't broken.

So, no winner winner chicken dinner. That's okay because it's all in the gamble. It was nice just to open up a pack of recent product and add some new cards to my collection.
Posted by Coast To Posts at 9:34 PM 1 comment: