Has anyone else seen these hanger boxes around? They've been haunting the aisles of my local Wal-Mart for several months now; I've been intrigued but have been able to talk myself out of buying one until today when I gave into the mystique. 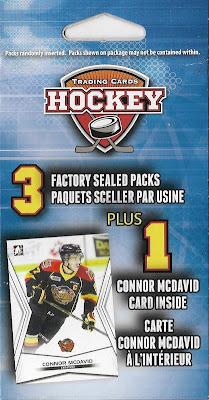 Maybe I'm being naïve with the promise of 3 factory sealed packs. God knows this box may very well contain three packs of 1990 Pro Set. All kidding aside, these repack boxes are usually like a box of chocolates.

Here's my guaranteed Connor McDavid card. The 2015 Leaf In The Game card that is also featured on the front of the hanger box. I wonder if all the McDavid cards inserted into the repacks are the same. 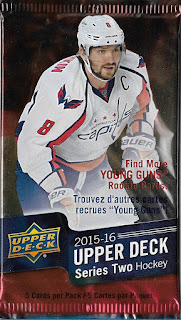 There were technically 4 factory sealed packs in the box. The 2015-16 Upper Deck Series II was a nice surprise. I was excited to dig into the pack and find out what it beholds inside. The hottest Young Gun from the Series II checklist is Jack Eichel; if I managed to pull it I'd go out and buy a lottery ticket tonight.

Although I have a near complete set of 2015-16 Upper Deck Series I, I don't really have many cards from the second Series; I think I may have bought a fat pack or two previously.

Kemppainen is a name I'm not familiar with. Apparently he made his NHL debut during the 2015-16 season suiting up for the Boston Bruins in 44 games during the regular season. Since then he has moved on to play hockey in the KHL as a member of Novosibirsk Sibir and most recently Ufa Salavat Yulayev. A little bonus here I suppose as this O-Pee-Chee 'Rookie Update' is a rainbow foil parallel.

A Young Gun hit! This pack is coming along strong. Grenier saw action in just three games with Vancouver last season, as he spent the majority of his time with AHL Utica Comets. He recently signed a one year two-way deal with the Florida Panthers, but likely won't be a significant contributor with the team and will see more development with the team's AHL affiliate.

This is my first card of Sharp in a Stars jersey; cool to see him coming back to Chicago for the upcoming season. The Blackhawks have shed a lot of their 'dynasty team' over the past couple of years but over this offseason they've regained both Saad and Sharp. Getting the squad back together.

I thought it was a pretty good pack overall, the rookies weren't guys to write home about but regardless they were nice pulls in general. I mean, it's not often I'm pulling Young Guns or Rookie Update cards from a single random pack, let alone both. 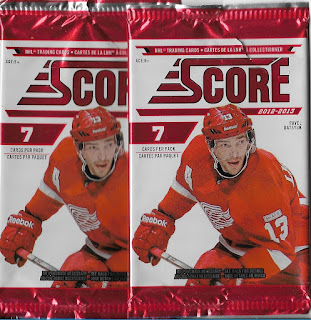 These two packs of 2012-13 Score felt like a dud. Because I've been working on a hard signed set of these cards over the last 4 years, I have seen every card a thousand times and they don't feel as attractive anymore. Like an overplayed song on the radio that you loved the first time that you heard it.

I'm not going to bother posting the contents of these packs. There wasn't anything worth noting anyway. 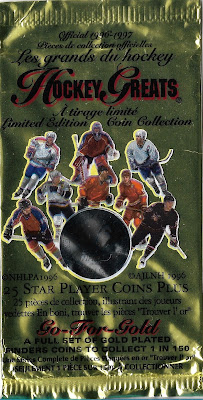 I don't believe this is considered a "sealed factory pack", probably an added bonus or something along those lines. I've gotten a few of these 'Hockey Greats' Coins from repacks over the years and never have the sweetest clue just what to do with them. How do you keep a coin in your collection? Maybe I should look into coin holders or design my own holder so that it fits sturdy inside a 9-pocket sheet. Any suggestions? 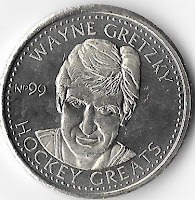 You can't do much better than Gretzky, calibre player wise. I think they did a pretty good job at etching the players likeness on the coins, at least this Gretzky looks alright and from the others I've seen they fair well upon accuracy.

The mystery box was fun to open. There wasn't much value from it but my hopes weren't set high so I wasn't disappointed by the outcome. Although I wish they would have added more variety to the packs; they could have switched up one of the Score packs with anything else and I would have been totally fine with that.

I'm a sucker for repacks so this probably won't be the last you'll hear from this product.
Posted by Coast To Posts at 10:31 PM 8 comments: