I just watched a clip of the Jets/Predators game from a couple of nights ago featuring “Big Buff” Dustin Byfuglien ragdoll-ing two players from Nashville during a scrum after the whistle. The confrontation was two nose honks and an eye poke away from treating Roman Josi and Austin Watson like Larry and Curly - a la the Three Stooges. 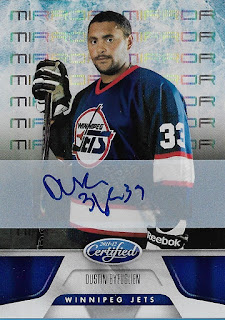 Byfuglien is one of the few I would consider monster players in the league. One that is dominanted by smaller, faster players. He is a big guy, he is a 6’5” giant on skates (according The the jost mass index he is the biggest player in the league) who delivers hard physically and sticks up for his teammates. He plays a solid play in his own zone but isn’t one to shy away from joining in on the offensive rush and it works. Not only that, he is considered to own one of the hardest shots in the NHL.

I pulled this 2011-12 Panini Certifed several years back from a box during the time of its release. It’s probably the only card that I ended up keeping in my collection over the past 6 years. 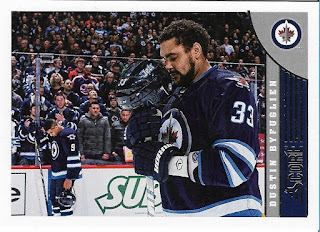 While we’re on the Big Buff trainn. 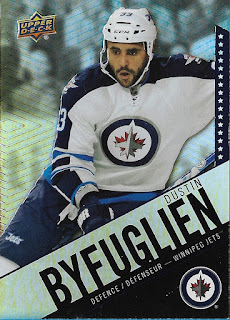 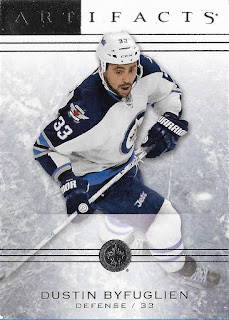 Great to see the Jets win again last night, I think the entire country of Canada is behind them during this post season run. The atmosphere at Bell MTS Place looks and sounds incredible.
Posted by Coast To Posts at 4:45 AM