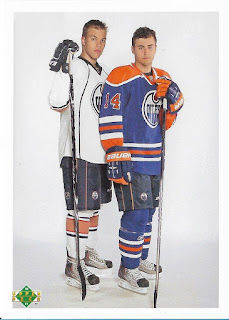 This card arrived in the mail earlier this week - It's the Upper Deck 20th Anniversary parallel of the Young Guns checklist card from 2010-11. It has been up there on my want list for some time now but I just never liked the going price for it. But with a little patience, I was able to score it for less than half the running listing price. THAT NEVER HAPPENS.

Hall and Eberle were expected to be two major components in the rebuilding of the Edmonton Oilers. A rebuild that didn't go exactly as planned and thus it was 1st overall pick after another. The Oilers loaded their team with THE best young player from across the world entering into the NHL for three years in a row. Despite how talented the team looked on paper, they just couldn't execute while on the ice.

Over the six seasons in which Hall and Eberle played together, the Oilers missed the post-season in all six of those years - finishing 30th, 29th, 24th, 28th, 28th and 29th in the 30-team NHL. They became the joke of the NHL.

Although they lost a ton of games over those years, I'll wholeheartedly admit that I really enjoyed following the Oilers over their disastrous run - the team played fast, they were youthful and the media hype, I’m sure came into play as well.

Hall, Eberle, Nugent-Hopkins, Yakupov heck even Magnus Paajarvi; there was a lot of young blood flowing through the veins of the Edmonton Oilers. 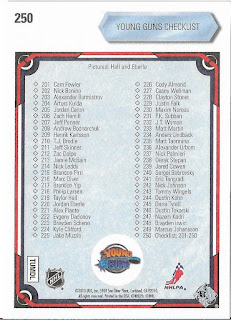 Much of the teams lack of success was shifted onto the shoulders of Taylor Hall albeit it was out of his control. A poorly constructed roster and constant organizational changes (I think they had 4-5 coaches over six seasons) undoubtedly played a big part in leading the franchise into consistent losing territory.

Hall was traded to New Jersey two years ago and enjoyed the best year of his NHL career just this past season; doing what he was expected to do in Edmonton, carrying the New Jersey Devils on his back and into the post season sunset. He has also been nominated for the Hart Trophy. They do say the best revenge is living well.

Eberle was moved to the New York Islanders last year in exchange for Ryan Strome and has remained offensively consistent. The trade free'd up cap space for the Oilers, who had big-money signings coming up with Draisaitl and McDavid entering their final year of their entry-level contract.
Posted by Coast To Posts at 9:41 AM