I really like the idea for the most recent Blog Bat Around that has been circulating around the sports card blogosphere courtesy of Torren' Up Cards - construct a starting nine/10 lineup with their best baseball autographs at each position. Simple enough.

I'm not a baseball card collector but I certainly am an autograph collector. Collating completely hand-signed hockey card sets have been my main hobby focus since returning to the game a little over 6 years ago. At the moment, I am working on three sets - 2012-13 Score, 2011 Panini Stickers and 1990 Panini Stickers. I'm only 18 cards away from finishing the entire 548 card Score set and have made significant progress on the other two.

So here is my starting lineup of my best/favorite autographs by position - Centre, Left Wing, Right Wing, 2 Defensemen and a Goalie. 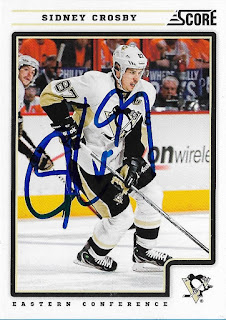 Sidney Crosby / Centre - He's my current favorite player so few other could trump Sid as the centre selection in my starting lineup. He is widely regarded as one of the greatest hockey players of all time.

This card was signed by Crosby after the Pittsburgh Penguins' 2017 Stanley Cup Parade. 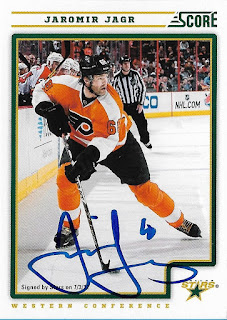 Jaromir Jagr / Right Wing - This was probably the most difficult position that I hadto select but in the end Calgary Flame's legend, Jaromir Jagr, takes the throne. Honorable mention goes to Brett Hull.

Jagr signed two cards from this set at a signing. 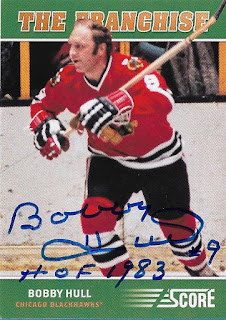 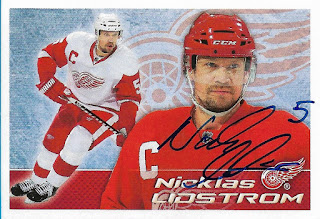 Nicklas Lidstrom / Defence - One of the most reliable defensemen to ever play the game. Oozes leadership both on and off the ice. 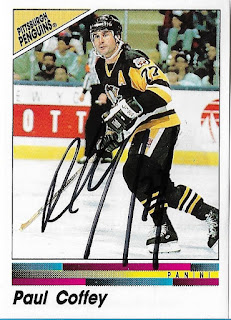 Paul Coffey / Defence - Embodied everything an offensive defenseman could be.

Received Coffey through the mail a few years back. Patrick Roy / Goaltender - Unarguably one of the greatest to man the pipes.

Roy signed his ‘90 Panini through a private signing.