Reading everyone's 2018 collecting goals over the past week or so has really inspired me and admittingly also made me a tad bit envious. I've seen some beautiful cards making the cut in those best pulls and pickups of the year lists.

As for my own 2018 goals - I just want to blog more. Hell, I would be pleased if I could just keep a blog up in general by the end of the year. I'll continue to work on that.

I would also like to keep things organized; a task which I have also seemed to horribly fail in the past.

I have a few things currently in transit which I'm looking forward to showing you all here on the blog. Fingers crossed for a prosperous hobby year ahead for one and all.

I stopped into my local card shop just the other day to pick up a 3000 Ct. storage box; figured I would start the New Year off with a hobbyist's idea of a clean slate. I couldn't leave without picking out a pack - since it was in the dead of the World Juniors, I thought I'd go with Upper Deck's Team Canada Juniors as it was only fitting. 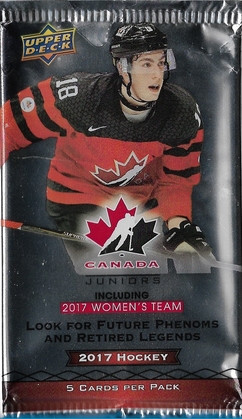 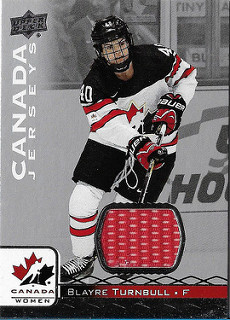 My first pack of 2018 and it's a hit! I hope it's an omen for things to come. It's a red swatch relic card but I'm not complaining, I mean, I'm still into pulling the odd jersey card - it's cut from a Team Canada sweater which makes it kind of cooler.

I  haven't heard of Blayre Turnbull before pulling this card but after doing a quick Google search I discovered she was recently named to Canada's 23-member roster for women's hockey at the upcoming Winter Olympics. Sounds promising!

Speaking of which, I'm really looking forward to Olympic hockey - men's and women's. Regardless the fact that there are no current NHLers involved in the tournament for the first time in 23 years, I'm still eager to watch those hard fought, competitive, tooth & nail type games which will certainly occur.
Posted by Coast To Posts at 9:12 AM