After what felt like a long week of work and ongoing home renovations that sometimes seem like they will never end - ‘twas nice to come home to find a box of cards that I have been waiting on tucked inside my mailbox. 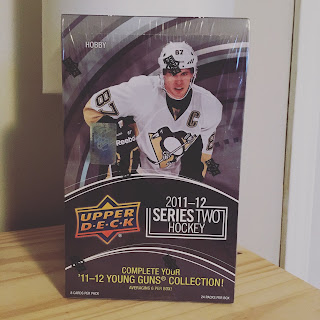 2011-12 Upper Deck is actually one of my favorite flagship Upper Deck releases in recent memory. I tend to hold a soft spot for the product since it's one of the first sets of cards that I picked up when I started buying cardboard again.

Like every box of 11-12 Upper Deck Series 2 - this one was chalk-full of update cards ie. Victory, MVP and O-Pee-Chee.

Nearly seven years later, Ryan Nugent-Hopkins remains the rookie card to look out for in terms of value from the 2011-12 products (his Young Guns card can be found in Series I). Although his variety of rookie cards have gone down since their initial release date, they continue to stand at the top.

Over the past seven years, I'm sure all you readers have seen your fair share of 11-12 Upper Deck base so I'll just get straight to the hits. 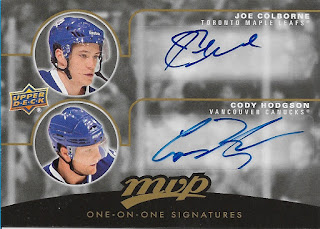 The highlight of this hobby box was an MVP One-On-One Signatures featuring Joe Colborne and Cody Hodgson; these dual autograph cards fall at a rate of 1:3500 packs. Despite the strong checklist, I landed the ‘dud’ of the group.

Things didn't pan out for Colborne as Toronto fans had hoped and now finds himself in the AHL skating for the San Antonio Rampage. Cody Hodgson has hung up the skates after being diagnosed with malignant hyperthermia, a genetic disorder that can be triggered by prolonged physical activity. 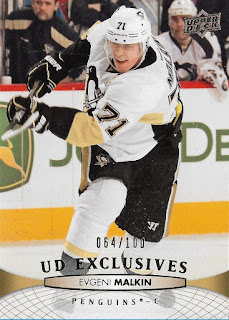 Exclusives fall at one per hobby box. I think I did pretty good with Malkin. 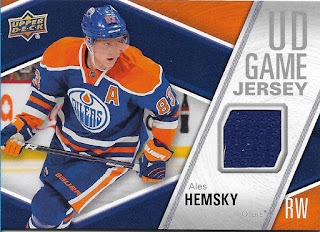 Ales Hemsky relic card featuring a blue swatch from an Oilers sweater. Did you know that Hemsky sits 8th on the all-time Edmonton Oilers scoring leaders list? I did not know that. Considering the history of legendary players who have passed through the system since the beginnings of the franchise, eighth position in team scoring history is pretty outstanding in my opinion.

These UD Game Jersey cards fall one per hobby box with their more sought after patch versions numbered /15. 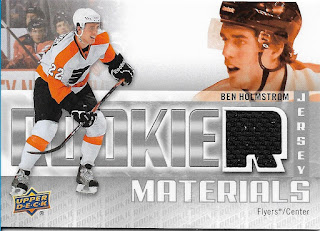 Holmstrom, now a member of the Bridgeport Sound Tigers, has become an AHL mainstay throughout his professional career.

Rookie Materials, like the UD Game Jersey cards, are a one per box hit. Patch parallels are also available, numbered /25.

The Young Guns that I pulled weren't anything to write home about; fair enough, Series II was fairly weak in regards to the rookie crop so I wasn't surprised with the outcome. If I was to pick my most prominent Young Guns card from the box, it would be Patrick Maroon who has been having some of his best numbers playing alongside McDavid.

Overall, I was happy with how the break went. The MVP One-On-One Signatures, despite the players on the card, was a really cool pull given the odds. Unfortunately I lost a lot of ground at completing the base set due to the amount of O-Pee-Chee/Victory update and MVP cards spread throughout the product.
Posted by Coast To Posts at 2:06 PM